Not only the Realme 2 Pro gets all the highlight for being the best mid-range phone this year, but their Realme C1 is also a hidden gem for best entry level category phone.

By reading the specs you may find the similarity with the OPPO A3s that has a 6.2-inch LTPS display, 2GB of RAM, 16GB onboard storage, 4,230mAh battery and Snapdragon 450.

Although the Realme C1 consists of plastic build. This made the phone very light and pocket-friendly. The matte finish frame gave a very comfortable hand grip. The back is slapped with a laminated plastic gave an impression it’s like a glass but it can pick up scuffs and scratches easily.

It does look and feels premium which is a good thing as other would sacrifice the design to fit their cost. The power button is placed on the right where the volume rockers are on the right. It has a triple slot SIM tray that can accommodate two nanoSIM plus a dedicated microSD card which can go up to 256GB. At the back is dual camera setup with a single LED Flash. It has a single down-firing speaker, a 3.5mm audio and microUSB port at the bottom. The display is a massive 6.2-inch 720 x 1,520 resolution with a notch display. It’s protected with Corning Gorilla glass that offers tougher against scratches and drop. There wasn’t much phone manufacturer would offer such glass protection. The display can get quite bright and legible to view under sunlight. Didn’t I mention, it has an 88% screen-to-body ratio? Doubt any budget phone comes close, thanks to the thin side bezels and FullView display.

Although it’s just a 720p resolution panel, the different between 1,080p is not really that noticeable, especially on video viewing and gaming. The fingerprint scanner is not availed on the Realme C1 instead it relies on FaceUnlock that houses on the notch of the display alongside with sensors and earpiece speaker. The FaceUnlock feature is quick and responsive on normal lighting like what we reported on the Realme 2 Pro.

Qualcomm Snapdragon 450 may not be the latest SoC but consider the top tier for 400-series Snapdragon. It has an eight-core CPU clocked up to 1.8GHz based on the 14nm process along with Adreno 509 GPU. It manages to score 74,676 points, that very close to the Snapdragon 625 devices. 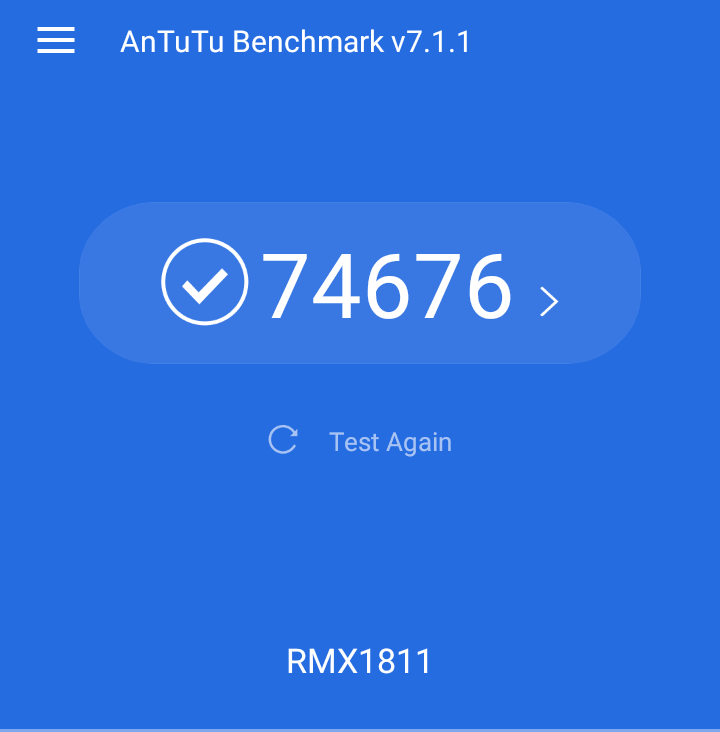 As mentioned earlier, the Realme C1 has only 2GB of RAM and 16GB of onboard storage. You left about 7.27GB usable space and by installing a few heavy games it already full. By adding a memory card, it won’t help much because apps and games are restricted only to install on the phone storage. With entry-level Snapdragon 450 with 2GB of RAM generally, the overall performance was just average and I did felt a second or two delayed when launched multiple apps in the background. However, when I’m in an app like Instagram, Facebook and Chrome, things aren’t that bad.

Gaming wise is just ok for normal games from Facebook and etc. Heavy title games like PUBG and NFS, it gets a bit sluggish even at low graphics setting. After all, this phone isn’t built for high graphics gaming.

The entertainment experience is very good on the Realme C1. The display is bright and vivid, the speaker is loud and not forgetting the humongous 4,320 mAh battery that can last you hours of movie/music playbacks. For an entry-level phone, Realme is generous enough to offer a dual rear camera system. The 13-megapixels f/2.2 is assisted by a 2-megapixels f/2.4 that works as a depth sensor so you can take Bokeh shots. Regular photos shots in daylight are pretty decent with a good amount of details and contrast. The problem that I got was the White Balance tend to get inaccurate especially in the low-light environment.

Selfie camera is a 5-megapixel sensor and it has the OPPO’s Selfie Expert DNA where it has the beauty mode with different adjustments for your liking. This is the things that appreciated by the ladies. AR selfie with stickers is present within the native camera app.

Here are some camera samples were taken with the Realme C1; The Realme C1 runs on ColorOS 5.1 based on Android 8.1. It’s the exact UI from OPPO that offers plentiful gestures and shortcuts. It has this Game Space that helps to optimize the game display configuration to fully utilize hardware resources. It also lets you automatically enable DND (Do Not Disturb), Prohibited Brightness Changes and Restrict Network access of background app for a better gaming experience. I can’t really tell what’s the SoT (Screen-on-Time) for the Realme C1 as the phone doesn’t show in the software. Based on my usage as a secondary phone that heavily uses for social media and video streaming, it can last me almost a day half and normal usage probably can last me 2 days with a single charge. Come to charging, the phone only comes with a 5W charger (5V, 1A) thus the charging would take around 4 hours+ but when I use the 10W charger (5V, 2A) all it takes is just 3 hours to complete.

If you are interested to pick up the Realme C1, there’s gonna be another round of flash sales over at Lazada Malaysia in conjunction of Lazada 12.12. It will be priced at RM 399 instead of RM 449 and begin from 10th December, 12 am while stock last.

At the price of RM 449 or RM 399 during the flash sale, Realme C1 no doubt a well-specced budget phone that doesn’t compromise the design. If buying online is not your thing, Realme has 500 authorized dealers nationwide.

If the Realme C1 couldn’t be crowned as entry-level king phone, it can claim as “Entry-Level Beast” phone.