What is ANC (Active Noise Cancelling)?
For those who don’t know, ANC uses a microphone to listen to the noise surrounding the headphone and emits a frequency that eliminates/cancels outside noise surrounding the user. The different was very obvious with and without the ANC especially in a quiet room or busy street. 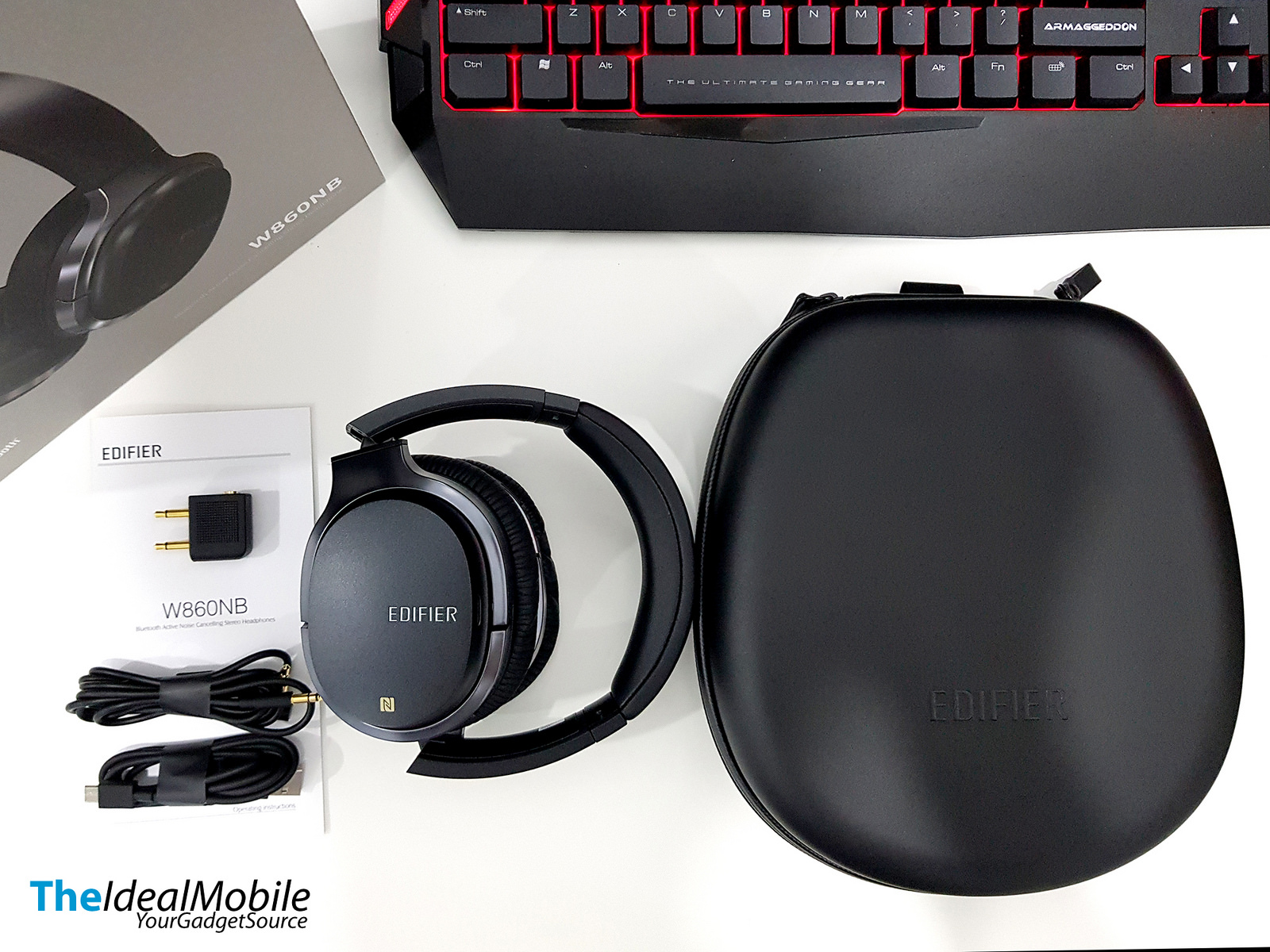 I’m glad that Edifier decided to keep the same design as the Edifier W830BT, clean and minimalist look. The “Left” and “Right” logo sign has moved inside the earcups making it more visible before we put in on. The earcup cushions are very soft and plushy where I can wear it for long hour listening. W830BN comes with a folding mechanism that you can fold it up if you are not planning to carry around the provided travelling case. The hinges and headband extension are pretty sturdy and allow additional fitting adjustment for different head size. The clamping force is just right and comfortable with enough padding on the earcups and overhead band. 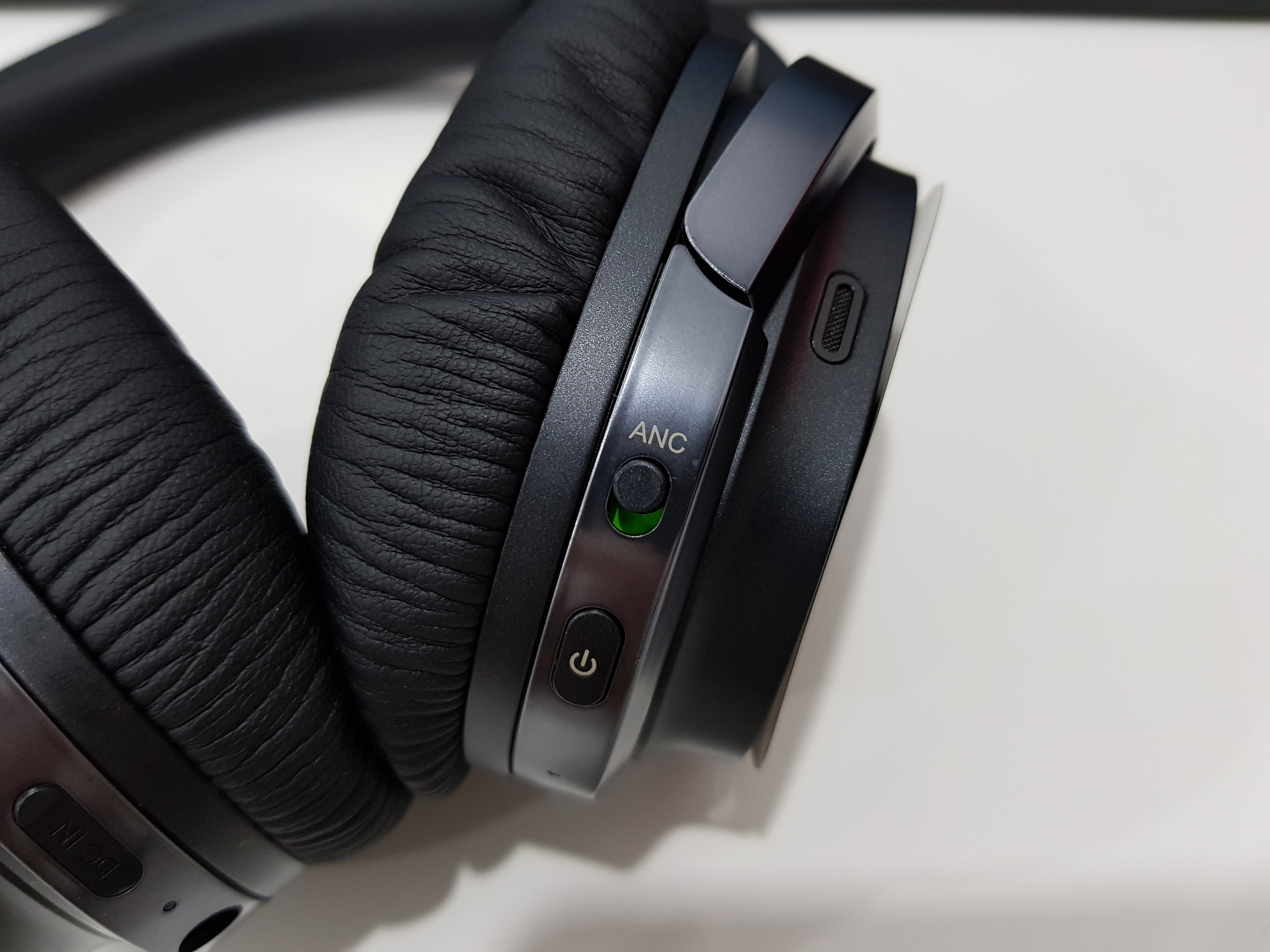 Because this is an ANC headphone, it comes with an ANC switch where you can choose to enable or disable the feature that able to prolong the battery life of the headphone. If you notice, the Edifier W860NB is missing the media control and volume buttons, this is because Edifier has replaced it smart touch controls on the side of the earcup.

I did find the touch controls on the right earcup quite sensitive and I did accidentally skip and bring-up the volume a few times when I try to adjust the headphone. It charged via microUSB port that located on the left earcups and comes with a 3.5mm audio jack if you prefer trusty-cable over wireless or when you ran out of juice. The W860BN comes with NFC (Near Field Communication) that allow simple tap & connect to establish the connection between the headphone and your NFC-enabled phone.

The manual pairing will be by holding down the power button for 5 seconds to enter into discovery mode, the LED indicator by now should be blinking Blue & Red. Scan the headphone through your device’s Bluetooth setting and tap connect.

The Bluetooth v4.1 is capable to connect up to two devices simultaneously and the Edifier W860BN also AptX compatible.

For a first timer like me, the ANC is like magic. The headphone has muted out my surrounding noises. In my case, by just enabling the ANC without playing any music, the consistent noises from the ceiling fan and air cond were totally muted. Probably due to this reason, ANC headphones are very popular with frequent flyers that always encounter with humming noise from the aeroplane’s engine.

Still, it doesn’t really cancel out every single external noise, I could still pick up common noises like honks, closing door and etc but at a much lower volume. This is actually very important if you are wearing this headphone walking around on the street and you may not able to respond/reflect if an accident happens. The Edifier W860NB provide highly versatile and performed way above what I expected. The 40mm drivers deliver a powerful yet well-balanced sound.

I’ve listened to some live recording, I was pretty impressed with the highs where it shows a lot of clarity, the choirs and instruments really come out nicely in this range. It’s more visible when ANC was turned on and I felt like I’m listening in an empty room, just me and the live band in front of me. The deadening of the exact frequencies made the music feel alive and exciting.

Not forgotten, the W860NB also supports Qualcomm AptX HD wireless audio that offers the highest quality audio stream from the compatible devices. The microphone was just average for voice calls and VOIP.

Based on paper the W860NB has a battery life of 25 hours of ANC on and 45 hours of wireless-only playback. I have been using it for almost 3 weeks for about an hour daily with a mixture of ANC on and off, the battery still going strong.

Do take note that the ANC will continue consuming the battery without needing to connect to any device if you didn’t turn off the ANC switch. I do wish that Edifier would have a voice indication when we turned on/off the ANC just like the SONY ANC headphone. This is a great Active Noise Cancelling headphone that won’t break your bank just like its other headphone and earphone without compromise its performance and built.

I did go to the Bose and SONY concept stores to try out their flagship ANC headphones; Bose QC35s and SONY 1000XM2. I can tell that the Edifier W860NB nowhere fall short and carrying a much more affordable price tag.

What I really hope that Edifier could include an App that we can select audio presets or control EQ manually.

The Edifier W860NB is available now for RM 499 over at Lazada Malaysia and it comes with 1 year local manufacture warranty.